An engineer who later got a business degree to achieve social and environmental justice through existing economic structures. He’s started or built many organizations and projects. Hank lives in Falls Church, VA, with his wife and is an avid bee-keeper.

In my last blog, I described going to Somalia during the Ogaden refugee crisis and how my initial 3-month commitment turned into a 4-year, life-defining event. I passed on the lower risk engineering research job with a large corporation (nuclear waste disposal of all things!) to become the President of the Disease of the Month Club.

While my steady stream of serious illnesses (malaria twice, typhoid, various undiagnosed maladies) made me a chronic patient, I actually started a national wood stove program. The risk was worth it and the work and dedication of Mohamed Ali Noor, Mohamed Hassan Nur, Barlin Hassan Ali and many others made the program a great success.

I want to expand on the notion of risk by telling the story of my attempt to create a sustainable timber harvesting company in Papua New Guinea. The impetus for the company was that Papua New Guinea landowners were being ripped off by larger outside timber operations. Not only did the timber companies grossly underpay for the forests, but they trashed what was there and had little positive social impact.

Our model was simple: help land groups get access to portable mills so that they could do initial processing or, if they did not have a mill, help them bring the logs to a centralized location for processing of rough cut timber or whole logs.

A core part of our approach was to help communities measure their “treasure” and determine what could be removed. Scientists including Mark Ashton (Yale) and Chuck Peters (NYBG) were enormously helpful in helping us understand the dynamics of the forest. One of my proudest moments was when Mark observed that it was the lowest impact logging operation that he had ever seen. 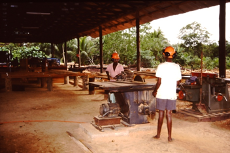 On the last point, the Forest Stewardship Council (FSC) and its standards were not yet popularized. Outspoken forest campaigners demanded we do no logging. We only removed 1-2 trees per hectare; even that small amount of timber could help a family get by.

My response to the campaigners was,”How are these families to pay their school fees or medical bills? How is your approach socially just?”

While the company we started was socially and environmentally sustainable, it unfortunately lost funding and went under. Some investors who had expressed an interest in addressing our under-capitalized position backed out. We could not find other sources of capital, so we had to shut down. That happens.

The risk associated when starting a new organization like Nature For Justice is enormous.  In my experience, the hardest part is not knowing what you don’t know.  But even then, there are times when you do know (e.g. get your funding lined up) and it just doesn’t work out.

When thinking about starting Nature For Justice we wondered whether it would be worth it.  The social problems stemming from the impacts of climate change are enormous and, ultimately, our impact may be small.  Was my attempt at sustainable logging in Papua New Guinea Worth it?  If I look at the dignity we restored to communities we helped, I know the answer is yes.  Nature For Justice is only in the beginning stages of its existence.

Today, we face four catastrophes at once: 1) the COVID-19 pandemic, 2) climate change, 3) institutional racism, and 4) political polarization and

Nature For Justice and Cultivo:
A Common Vision

We aspire to be a leader in using nature-based solutions to achieve social justice for communities affected by the climate crisis. The

My Nature For Justice colleague, Kevin Bryan, posted a blog and video last week on equity and justice and it reminded me

For news about our plans and projects